Everyone thinks of something different, when confronted with a /p callsign. But in the end most of us can agree on at least a few things. A portable station is e.g. not powered from a 110V/230V AC-wallplug and it’s nature and construction allow it to be moved at least in a car. For HF I own to different yaesu radios: a FT-817ND and a FT-857D. With the FT-817ND beeing a QRP radio I am limited to 5 Watts output. If more is needed, the FT-857D can take me at least up to 100W. My QRP set up will be described here. This text is supposed to cover the following requirements:

The situation from which those requirements arise is the following: I live in the 2nd floor (in germany we count it as groundfloor-1st-2nd and so on) of a 9stories building in an area that we like to call „Plattenbausiedung“. If you don’t know what that is, just ask google for a picture… it ain’t nice, but it’s cheap and the flat itself ist awesome, plus my very own one is only 100m away from the woods. Consumer electronics of today, and lot’s of wireless features, make for an S9+ Signal on any shortwave band at any time of the day. Even PSK31 can’t get trough all this. The UHF repeaters I can reach in and around Jena (DB0JJ and DB0JNA) are both so well positioned, that I myself could reach them with a wet shoelace for an antenna and 100mW outputpower. So when I want to do serious DXing, contesting or any other ham radio related -ing like PSK31-ing, CW-ing, WSPR-ing or else, I have to move my stuff to a better QTH. The hills around Jena are great places to set up a HF station and for relaxing in gerneral. Germany has strict rules about camping and open camp fires, but there are places where it is legal. So my idea of a station was more of a base camp style deployment. With loads of great gear beeing brought to the QTH by car or motorcycle and only a few meters of carrying by muscle power. Last but not least, I would like to be quick about packing my ham radio stuff for a holiday with the car. Just grab „the box“ and go. So my wife can’t argue that packing my stuff takes longer because of that radio stuff 🙂

The radio of choice was the YAESU FT-857D as it fulfilled all my requirements with just 2.2kg of weight. My system is absolutely not weight optimized, as it will not be carried around by myself that much. If weight is key, I take my FT-817ND with me. A 100W on HF, 30W on 2m and at last 20W on 70cm ist more than enough power for me and the FT-857D delivers this power as it is, no further amplifier needed. I soon realized the D is important (absolutley no pun intended). The D in FT-857D ist for DSP-Digital Signal Processing. This feature gives me noise reduction, bandpass and so on. The most important: It gives me options to fiddle with. I sometimes believe, that setting up a station is more than half my fun in ham radio, and pushing buttons is the rest 😉 Those complex menus of the FT-857D make for something new to learn every time. Step by step I went from Noob to Greenhorn. When I bought the radio, I didn’t know what part of ham radio would be „mine“, so the FT-857D gave me the feeling to be prepared no mather what. I didn’t know about C4FM or things like that at the time. Digimodes like Yaesu’s C4FM, DStar, DMR and so on, will be done by other radios. But PSK31, AFSK, APRS, RTTY, CW, FM and SSB are what I like to do, and the FT-857D does it all. I am sure everyone knows a better Radio to do some of those modes, but I have not seen any other radio with this wide a range of capability, while beeing compact and light weight like the FT-857D. Being able to detach the control head from the main radio body, gives me even more flexibility. The box can go on the back seat of a car or even the trunk, and still be controlled from the front. Last but not least it allowed the radio to be placed sideways in the box, which then again allowed for a more optimal use of space for equipment such as batteries.

My third requirement was a rugged case. Now what I found on the internet were ammo cans for sherman tank ammo. They are 15€, waterproof and rugged. Youtube has people run over those ammo cans with trucks and toss them from buildings. Again, weight is not a real factor in this setup so I bought this instead of a fancy as pelican case. With a slab (sealed lead acid battery) the whole setup is 10kg. The inside form is not optimal, as it is slimmer in the middle section, but a simple wooden plank leveled that out, and the FT-857D’s mobile mount was glued to the can itself and the wood.  The case is rugged, waterproof, and the lids can be opened by a giant wearing deep winter gloves.

The back compartment seems to be made to fit exactly two slabs and despite the tablet and HF antenna all of my gear can be stored in the box itself. There even is enough room for a short UHF/VHF mobile antenna. For HF I own a fullsized Buddipole, that will be described in later articles. All of the needed cables are stored within the box. The DC-cables have anderson power pole connectors, to allow for interchangeability and compatibility with loads of EMCOM stuff. The box holds the following cables: 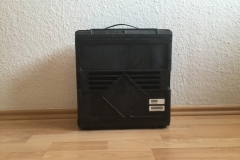 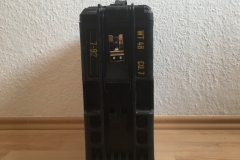 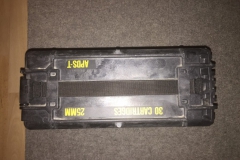 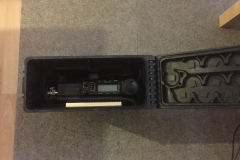 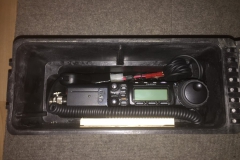 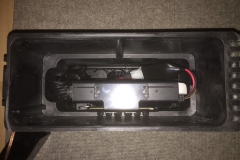 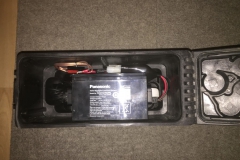 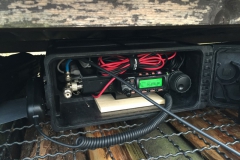